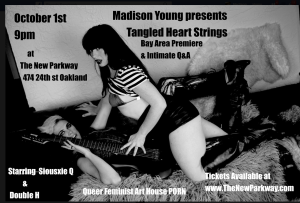 “THE BAY AREA PREMIERE OF TANGLED HEART STRINGS: A FEMINIST ART HOUSE FILM ABOUT A FEMME, A ROCKER, AND THEIR GUITAR.”

OAKLAND, CA
START TIME: 9PM
THE NEW PARKWAY THEATER 474 24TH STREET
OAKLAND, CA 94612
Madison Young presents The Bay Area Premier of the feminist erotic film ­ Tangled Heart Strings: A FEMME, A ROCKER, AND THEIR GUITAR ­ STARRING BAY AREA SWEETHEART SIOUXSIE Q AND NEWCOMER ­ DOUBLE H.
Slip on your tightest rocker pants and tune up your guitar because it’s time to rock out at the New Parkway Theater in Oakland on October 1st at 9PM located at 474 24th Street. Join us for this rock inspired art house film, food, community, beer, and a night that promises to be provocative, sexy, hilarious, wildly hot and thought provoking.
Come have a climatic artgasm with us as feminist porn icon, Madison Young, hosts this titillating absurdist film screening. Join Ms. Young for an intimate Q&A with the filmmaker, along with some of the cast and crew to chat about the her newest film Tangled Heart Strings.
Madison Young’s Tangled Heart Strings is a wild and emotional ride through the inner workings of a poly triad relationship between a feisty femme play by Bay Area’s sweetheart and columnist
     
 for the SF Weekly ­ Siouxsie Q, sexy Brit rocker Double H, and Ibanez ­ a dangerously seductive electric guitar.
Your mind is probably racing with questions. How does someone have sex with their guitar? How do three individuals negotiate the boundaries and emotions of passion and jealousy polyamorous relationship? Quench your curiosity October 1st at the New Parkway Theater for this sensational premier and discover the absurdity of what ensues in this mockumentary erotic film that is one part Spinal Tap, one part David Lynch, and one part Russ Meyes and 100% rock n’ roll.
Filmmakers’ Bios:
Filmmaker’s bio: Madison Young is a revolutionary artist, activist, filmmaker, wordsmith, and curator. Young’s breadth of work in the realm of sexuality spans from documenting our sexual culture in over 40 feature length feminist pornographic films that have won numerous accolades including 6 Feminist Porn Awards, numerous Xbiz and AVN nominations, and have been screened at Yale, Harvard, Hampshire College, Northwestern University, and UC Berkeley. Her writings have been published in the Feminist Porn Studies Academic Journal as well as her recent memoir, “Daddy”. She is currently writing “The DIY Porn Handbook: Documenting Our Sexual Revolution.”
Videographer’s bio: Creamy Coconut is a production company specializing in surrealism and educational entertainment. Surreal education is when a sexy mariachi band is interrogating a mime about multiplication tables. Then they hook up. The ultimate mission is to promote peace on earth by providing the option of fun learning healthier sex shoot loads, not guns. Based in Los Angeles with roots in NYC and the Bay Area, Irina (director and founder) brings psychology and film training to merge high production value with hardcore fucking. Creamy Coconut films have been known to screen at international film festivals and win awards as well as being available on VOD websites such as PinkLabel.tv. Creamy Coconut offer film and design that comforts and tickles the mind, while encouraging people to explore their fantasies in a safe, holistic, communicative, and nourishing environment.
Feisty Femme: Siouxsie Q is a slut, writer, performer, sex worker activist, playwright, musician and revolutionary. She holds a Bachelor of Arts degree in Theatre Arts and is known to transform into a ukulele playing mermaid during high tide. She has traversed the globe singing siren songs and hustles hard to bring slut pride, mermaids, and mayhem to the masses, but now
spends most of her time performing and making smut in San Francisco. Whether frolicking in a dungeon or strutting on a stage,Siouxsie Q is bound to work her way into your heart.
Rocker: Double H is a nonbinary, genderqueer performer and educator based out of the United Kingdom. Tangled Heartstrings is Double H’s international screen debut performance.
Tickets $10